Yesterday, I had the thrill of taking in the Super Bowl festivities in downtown Indy. I'm a huge football fan, and this is something I was very excited about, so when some free tickets to the NFL Experience landed in my lap, I just had to bite the bullet and go.

And it was a beautiful day to be there. Temperatures in the upper 50s, a rare feat for Indiana in January. Clear skies. Sun. Some wicked winds at times, but it was all part of the experience. Mom went with me, and we took in the sights.

I was determined, going up there, to make a statement out of this experience. (I live in statements; it's a problem.) I wanted to take this opportunity to smack life and shadows in the face, to determine to live with a Yes! and to use this chance as one of many to take my life back from those things that would try to take it away.

It's kind of an obsession with me.

I live in this tension...between what has been and what has been under what has been. The missed opportunities, the spoiled moments, when I have ever let anything limit me. I guess in so many ways, I am constantly trying to prove myself to the universe. Or maybe just to myself.

We parked in our pre-paid parking garage and set out for the Circle (Monument Circle, for those of you unfamiliar; it's why Indy is called the Circle City) and the giant roman numerals - XLVI. Television does not do these things justice. They were massive, and it was cool. We walked through downtown, taking pictures, looking at the little stores and sights, engaging with people handing out this or that. Made our way down to the Village (think - giant street fair), then across to the convention center and the NFL Experience.

That's when I got a little "stupid."

I went into this thinking I was going to do everything. Throw every football, kick every field goal, stand in lines and attempt every participatory activity they had. This was a theme park, or so they called it, and having been to King's Island six times and Kentucky Kingdom once and spent the entirety of each day sitting on a bench, eating funnel cake, and watching people vomit...I was determined to have that theme park experience. Nice and safe without the whirlygigs and spin-arounders; somewhere awesome. Like football camp.

But ok, the thing is this. The lines were RIDICULOUS. It would take 45 minutes to do just one activity, let alone all of them. You couldn't even really tell where most of the lines started; they just dissolved into masses of people extending beyond the velvet ropes.

And yeah, I'll admit it. I was disappointed. Slightly. And then really disappointed because I was watching some other people tackle these activities, and they were just wasting time. Flubbing kicks off the tees, throwing 2-yard passes despite their best attempts, getting caught in tackling dummies. I was like, Really? But there was something about their smiles that was infectious. Watching families and even strangers encourage one another, share in laughter, just soak it up and enjoy it. My bitterness didn't last long; it was just a good time.

In the kids' area, they had these really awesome comic-book like mascots all over the walls and the fences. I was looking at them, partly as a designer and partly as a kid. And they were just fantastic. Then, I ran into the Colts' one - a mean-looking horse with a growling face and two fists. I ran right over and stood next to him, growling and baring my teeth, and showing my fists, then demanding mom snap that picture, too. 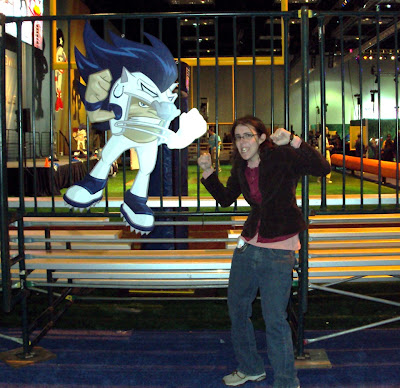 Then in the hallways, they had uniforms of all the different teams, and you could stand behind them and put your head through and be a player! I think I took 3 or 4 of those before mom got weary.

On our way back through the village, we went up to see the ESPN broadcast stage, the large helmet sculptures, the ice sculptures. We walked through the Huddle, a gathering place of sorts where the news crews were supposed to be broadcasting (they totally weren't there, even though it was the middle of the news hour). We were on our way back to the giant numerals on the Circle, where mom had hoped they would be lit up for the night hours and would take a better picture.

Then it hit me.

I tried to convince mom how awesome it would be to take a series of four pics when we got back there. Me in front of the X making an X, in front of the V with a V, the L with an L and the I, of course, with an I. She flatly refused. I was energized; I was having a blast and just soaking it all in. Then she turned and said it,

"I'm not going to promote you acting stupid."

Stupid. Stupid hadn't occurred to me. And to be honest, neither had anything else. Neither had the statement I'd spent the past week thinking I'd make just by going.

You see, once I got there, everything just vanished. I was walking back to the car when it suddenly hit me - did I accomplish anything? What happened to all that energy that was breaking the bank and taking life by the horns and being ruthless and relentless in its pursuit of that moment of...freedom?

It got caught up in the freedom itself.

Did I come home with a great story to tell about kicking bondage's butt? About letting the world have it? About standing defiant and taking my life back and living this Indiana Jones adventure while conquering the chains that we all have in our lives? Did I come back with a step-by-step understanding of how to win, of how to claim a victory? Something I could share with others and teach them how to find their own freedom, their own way?

But I came back with fantastic memories of a once-in-a-lifetime experience, of a street fair and a theme park and giant roman numerals.

Just a moment. A moment of being. Just to be. Just to smile.

What agendas are keeping you from achieving freedom? What are you struggling against to prove yourself, to the extent you're missing out on some of life's greatest moments?
Posted by Aidan at 9:03 AM