You've heard it said that it wasn't the nails that held Christ to the cross - it was His love for us. But...what about the hot glue?


I did not grow up in a Christian home, but there were a few token "icons" around the house. My brother had an illustrated Bible and I had...well...this: 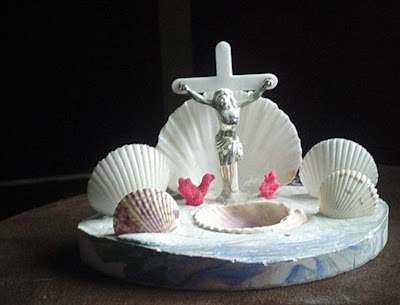 Ask me what it is. I can't tell you. It's Jesus on the cross surrounded by cheap plaster and real seashells. Ask me when and were it came from. I don't know. Mom says I must have gotten it at the beach, and I vaguely remember a trip to Myrtle Beach when I was barely old enough to remember, but I don't remember picking this out or bringing it home or even seeing it anywhere. For as long as I can remember, though, this little sea Jesus has been in my room. On my dresser as a child, now gracing the top of my bookshelf.

And for as long as I can remember, we have never figured out how to fix Jesus.

For the better part of 27 years, Jesus inexplicably keeps...falling over. I would wake up in the morning, and there would be this statue on my dresser. Completely intact, but Jesus toppled into the clamshell. His cross came disattached at the feet, and He fell. We tried krazy glue, but it didn't hold. We tried it again, and nothing. For months, then years, it was a constant guessing game as to when He was going to fall again. Every so often, I would look at my dad, statue in hand, and say, "Dad, I need you to fix Jesus again."

He always tried. It never worked.

After awhile, we took to placing large globs of hot glue at His feet. It's still there. You can kind of even make it out in the picture. A new fall, a new glob of hot glue until there was no way at all Jesus was falling off His pedestal again. And then...

He fell off the cross. Or the cross fell off of Him. Jesus would still be standing, but I'd wander over for a clean shirt and find the cross lying behind Him. Between Him and the seashell. Away from His hands. And just...down. Several more years of fixing, more krazy glue, more hot glue, more vain attempts. And then...

The cross broke. In two. Tall-ways. So Jesus, through the hot glue at His feet, and the bottom half of His cross, through additional hot glue, remained standing. The top half of the cross...I guess He let go because it snapped off and keeps falling off. Just this week (at age 27), I found the top half of the cross fallen sideways between Jesus and the seashell. His hands still outstretched, but no cross there to hold Him. I put it back, but who knows how long it will last?

I say that to say this: I don't know why Jesus keeps falling. I don't know why His cross keeps breaking. If you asked my rational mind which part of this treasure would break, I would tell you the plaster or the seashells. There's not so much as a chip out of either. But the cross...

It's just a mess.

But wasn't it always? Wasn't the cross a mess? Wasn't the perfect, sinless Son of God hanging there like a common criminal for the sake of the guilty a terrible, horrible, beautiful mess? It shouldn't have had to happen that way. Yet, I am thankful that it did. I am thankful that I have a God who will come down here and get into this mess, made what seemed like a bigger mess, and came out with grace, mercy, and an eternal, reconciling love.

Maybe this broken statue is my Lord falling for me (the object of His affection) over and over again. I know I have fallen for Him.

I'm not ashamed to keep a broken Jesus on display. I have my own brokenness, and He's been broken for me. If you ever visit and look at this little token, you might find before I do that His cross has fallen again. It's ok; I'll just laugh and tell you this story. But I wouldn't get rid of it for all the world. It means something, and even on the days when I'm not sure why my heart is so attached to this display, it's got something deeper in me and I cherish its continued presence.

Hot glue and all.

Perhaps all that glue is a sign of the way He's melted my heart as I willingly submit to being at His feet.
Posted by Aidan at 12:10 PM