In June, I wrote as openly as I knew how about Harold's death, the stinging loss we were all feeling, and particularly about grief and love.  Because grief is love.  And today, my heart is once again racked with both.

You may also remember me telling you about my dog, Kiira, who at age 12 decided to have her first seizure in May and then...nothing.  We tried her off the temporary seizure medication, intending to start something long-term if she relapsed into another fit and for nearly three months...nothing.  Last night, she did not give us a chance.

Just after I'd fallen asleep, I awoke to an excruciating noise - my big fluffy girl having her first seizure relapse on the floor next to my bed, knocking her head against my dresser, cutting open her nose, drooling all over my rug, and not stopping for nearly five minutes.  When she came to...well, she never really came to.  She came out of the seizure but was strongly disoriented and could not seem to hear or see.  Or smell, as I would find out later.  She got very aggressive with our smallest dog and sought her out to pin her in a corner and tear her apart TWICE before we snatched the little dog away, tucked her in the bathroom, and came back to Kiira seizing in the living room floor.  For another agonizing 4 minutes.

Over the next 45 minutes, she added two more.  Then a fifth overall as we were loading her in the car to head to the emergency vet.  We had a few emergency seizure pills leftover, but she could not sense them in my hand and would not swallow them or even try to take them, when she's normally one to eat pills like candy.  (Or cheese or whatever dogs like.)  We had to get her some help.  She had a sixth seizure in about an hour's time as the emergency vet was wheeling her back on a gurney to try to get some medication in her.


The medication took effect, but the ER vet warned us we might have a hard decision coming up.  I didn't listen; the medicine had worked before, and I wanted to see what it did when we could get it in her.  I didn't want some stranger who had just met my dog and didn't even know my sweet girl telling me this was it.  So for nearly three hours, I sat in the ER with Kiira, who was lying on a gurney still on the blanket we'd carried her from the house in, and pretty much zonked out (snoring) from the medicine.  Twitching, but not really seizing.  As soon as the two of us were alone, I took her paw in my hands and prayed out loud.  (We rescued her as a puppy, and she knew how to shake hands from the moment she came to us.  That paw was special.)  Jesus, I said.  This is my little girl...and an incredibly honest prayer poured out for a good twenty minutes.  Her breathing regulated, and she visibly calmed, though still twitched.  So I begged them to let me bring her home.

It was important to me for a number of reasons.  If this was it, I didn't want her in a place like this in a setting like this in a circumstance like this.  I wanted her where she knew.  If I had even a few more hours, I wanted her vet to weigh in, to see her, to offer an opinion.  And I wanted the two confused little dogs left at home to be able to see her again, to be around, to have the chance to sniff this out and comprehend it however dogs do.  In an ideal world, I would have liked to lose her at home. 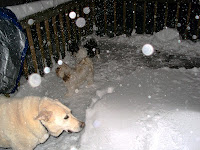 So we were up all night, Kiira and I.  Lying in my floor with her in and out of agitated.  Whimpering.  Not able to respond to sound or even my voice, not able to track my hand or her food or her water with her eyes, not able to sniff the kibble I held out in front of her, though she finally found it with her tongue, which was kind of nice because she never was my kissing dog, but we got in a few good licks these last hours.  And sadly, I found...unable to get up.  Somewhere in the midst of the seizures, likely early on as I think back on it, the back half of her body (legs, tail) had been paralyzed.  Even if I stood her up, her legs wouldn't pull up, wouldn't hold her, and she crashed back to the blanket, frustrated and whimpering because she wanted to go.  She wanted to get up.  And her body was telling her no.

A few more hours passed with no change.  She whimpered constantly, loudly.  She could not see or hear or smell...at least, she wasn't showing that she was, though if I got just close enough, she almost made out some audible cues.  And she couldn't stand up.  When morning came, I was on the phone with the vet.

After a night of crying hard more than not, I had just about regathered my composure but when they answered the phone and said, "How may I help you?" and I formed the words, "I think I have a difficult decision to make this morning," I started bawling all over again.  From that point on, I could not stop crying.

We loaded her into the back of the SUV and headed to the vet, expecting the worst but hoping for something.  The doc who had diagnosed her seizure just three months ago was the one I requested, and I wanted him to look at her and see if there was something we were missing before we did made any choices.  But the truth was obvious.

I'd been promising her all week that I'd brush her when I got the time.  I'd never gotten the time, and from the first seizure last night, I felt so guilty as an owner.  When we reached the inevitable decision that this was going to be best for her, I spilled my heart and the vet graciously brought me a brush and gave me a good 40 minutes, maybe more, just brushing my girl.  (She was the kind of dog you could brush for 6 hours and not feel like you were making progress, but she always loved to be brushed.) It visibly calmed her.  When he came back to see if we were ready, I was brushing with one hand and petting with the other and sighed.  Here, she seemed so calm.  "She loves to be brushed," I told him.  "See?  It just about put her to sleep."  Then I caught what I said and added, "Bad choice of words."

But we were as ready as we'd ever get for this sort of thing, and if she was going to be calm, I wanted to take this moment so she would know peace.  While he gathered his stuff, I told my aunt that I was going to pray.  And again, I grabbed my pup's hand and prayed out loud, thanking Jesus for the twelve and a half years we'd had together and this beautiful dog He'd blessed me with, then turning to my girl and reminding her that I loved her so very much and that she was a wonderful dog...and that this was going to be ok.  That it was ok for her to go, for her to not have to hang around for us any more.  But oh, that we loved her.

When the vet came back, she started to get agitated.  Like she sensed something was up.  She looked up at me and said she wasn't ready yet, that her spirit was still in her...but we all knew it wasn't.  A part of it, yes, but most of it gone and whatever remained, trapped in a body that had failed her and even if we could find some measure of stability, would fail her again and it's just so senselessly violent and inevitable.  She gave me that look like, "But I love you.  You know that, right?" And all my heart could think was, "And I love you.  And this is love."

I held her face in my hands and put my nose right up on her snout while the doctor pushed in the medicine...and there in my arms, I gave Kiira back to God, asking Him to remind her that she's a good puppy and to keep her ready for me when I see her again one day..and to brush her before I get there because that might possibly take an eternity.  Then I laid her head gingerly on her blanket and pulled back a little, still petting her softly.

The way she laid there, it was just like I knew her in her greatest of times.  That poised look in her body, that adventurous look in her eyes like at any second, she was going to start dream-chasing and running around like a crazy puppy...and I thought maybe she already was.  I hope she was.  And I hope she found that T-Bone somebody threw over my fence a couple months ago that I refused to let her eat.  But when I felt her go, my tears stopped.  Peace.  Absolutely the right thing for her...it was love, but I'm left in grief.

My heart is heavy, but I know that this morning was the move of mercy.  It was the greatest love I could have shown her.  She never has to have another night like last night again.  That is comfort.  But I am hurting like crazy, and there is this mutt-shaped hole in my heart that will never be replaced.  Never.  That is grief.  But there is a God who comforts me and who gave me the strength to live these last few hours in the most gracious way - centered on love, honored by time, and metered by mercy while drawing Him into this circumstance with every breath.  He didn't take her from me; He let me give her back to Him.

And though it hurts right now and will hurt tomorrow and will hurt ten years from now, I have not once in my life had anything but peace for the things I've given back to Him.  Lord, take good care of my Kiira.  And let your peace comfort my heart so that one day, even in my grief, I will be able to stop crying again.  Kiira, thank you.  I love you, girl; always will.  Best. Dog. Ever. (Don't tell the other girls I said that, but you know it's true.)
Posted by Aidan at 1:30 PM