This week, I am somewhere on a lake in the mountains of east Tennessee.  (A moment to be jealous....ok.  Let's move on.)  Water is fairly new to me; I haven't spent a great deal of time around any measurable water.  I've only been to the ocean maybe twice in my life.  It's been really fun to watch the way the water plays.

But mountain water?  Man, the other night was one of the most beautiful things I think I have ever seen with my naked eye.  And I kind of know how Noah must have felt.

It's hard to understand the magnitude of the flood unless you've been around the water.  Particularly, the mountain waters.  It's hard to appreciate what the storm looks like unless you've been here to see it.  The other night, I was sitting around the living room late in the daylight, looking out the large sliding glass patio doors as a storm started to roll through.  First, the waters churned.  The skies darkened.  The clouds opened up, and it started to pour.  With such an expanse of lake, you couldn't see anything past the big maple tree standing there in the backyard.

As the rains continued, something interesting happened.  The whole world went black and white.  Shades of grey everywhere, not a drop of color in sight, save the pretty pink flowers sitting right outside the patio door. But everything was in grey.  Even the giant tree not 40 feet away.  As if God had opened up Holy Photoshop and hit the "grayscale" button, just like that.  The skies started to clear, the rain started to pass, and the other side of the lake started to reappear - but all in shades of grey.  It was breathtaking.

It's how, honestly, I think our world is.  Not black and white; not so drab as all that.  Not cut-and-dried, as we might say.  Not in full color, either.  The world really lives in shades of grey, which sounds like a bad thing.  It sounds like we've settled for what that is.  We've put such a negative connotation with grey areas - convinced we should either know or not know and thus not have to deal with the middle ground - that it's hard to imagine how beautiful this could be.  But it's all middle ground.  That's our mission - to find a way to live in the middle ground.

It doesn't end there, however.  After the rains had passed, as the other side of the lake was starting to come back into view, as the sky was breaking and the mountains were pushing through, as the sun started to light the way again, everything stayed in that misty haze of greyness...except for the rainbow that stretched out over the water.  That, my friends, was in living color.

So I found myself thinking of Noah.  I've never had an appreciation for the flood before, although I lost a good chunk of my house and my hometown to a flood just a few years ago.  Here in the water, in the mountains, I understand a little more.  The Ark came to rest, we are told, on Mount Ararat - Noah was stuck in the waters of the mountains.  After witnessing a series of thunderstorms here this week, I know that he must have been trapped in this grayscale world.  His eyes had probably long-adjusted to the shades of black and white stretched out before him.  Then, the rainbow.

The promise of God in full, vibrant, living color.

Can you imagine what that did to Noah's heart?

God's promise is the same today.  In a world of black and white and shades of grey, God's promise is a full-scale, full-color, living, vibrant contrast to all that we have come to know.  Every now and again, the storm breaks just enough that we can see His promise stretch out above the skies and know that He is there.  It is an incredible sight.  Truly breathtaking.

The camera picked up a bit more color than my naked eye, but this is what I'm talking about: 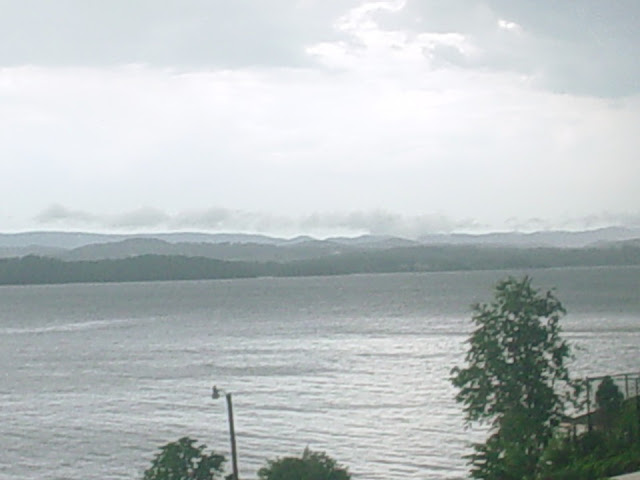