Yesterday, I theorized that a world of virtual unreality is keeping us from touching our God.  Today, I want to expand on that and let you in on what I think is the greatest obstacle to our personal interaction with our Lord.

Frankly, we've made Him too big.

In the early pages of Genesis, God walks with Adam and Eve in the Garden.  He wrestles with Jacob in an isolated place.  He knocks on Lot's door and stays the night in Sodom.  Later, we see Him meeting with Moses on a mountain, carving commandments into stone by His own hand.  And eventually, walking a road to Calvary.

For the past couple of years as I have read through the Bible more than once, I keep looking for that verse that says, "And then the Lord left their presence, enlarged Himself, and took His place in the sky to loom over His people from an unreachable Heaven."  I haven't found it yet.

Let me ask you to consider this: when you think about God calling out Adam's name in the Garden....how big is He?  In my mind, I get kind of the flowy robe image of God who is slightly obscured so that you can't really see Him and yet, is somehow perfectly sized so that you could imagine touching Him.  I can imagine what it might be like to be Eve, to be standing next to God, and to look down and see an actual foot.  Because in the Garden, God must have walked on actual feet.

Or what about when God wrestles with Jacob?  How big do you imagine He must be?  Jacob nearly beat Him.  They wrestled until morning, and Jacob didn't know it was the Lord.  If the Lord was so much bigger than all of us, as we so frequently imagine, don't you think Jacob would have known the Lord by size, if not by sight?

Or how big is the God who knocks on your door?  A disembodied hand as the sun begins to set?  We know He could do so; we've seen the writing on the wall.  But how does such a giant Lord come into a modest home for a night's protection?

We know God is great.  We know He is incredible grander than we ever imagined.  We know there are the times where He is bigger than everything - when His presence fills the temple with fire and smoke, when the aforementioned hand writes on the wall, and so on.  We even sing that He has the whole world in His hand.  And if His hand is big enough to hold the whole world, then how much bigger must our whole God be?

And yes, we know that God can take the form of a man.  It does not shock us to think of this as an actual possibility - that in these stories I've mentioned, it is obviously the great big God becoming wholly normal and appearing as human for our sake, for our eyes to see.  Maybe there's truth in that.

I think it's the human form that God prefers.  He created man in His image and chose, from the start, to walk with him.  He chose, from the beginning, to put Himself next to man so that the experience of God was a tangible, relational, physical interaction.  So that you could see and hear and smell and touch and talk to God.

Then here we are today, and somehow, we've made Him so big that we forget about that.  We never consider the possibility that we could actually touch God.  That we could talk to Him the way we talk to our friends and our families.  That we could hear Him speak.  That God...has a smell.  A smell!

It wasn't that long ago, or at least it seems not that long ago, that NASA released images from its Hubble telescope of the "Eye of God" - a nebula formation in some far-off piece of the heavens that certainly looks like an eye.  And that's kind of what we think of God.  That's how we have been relating to Him.

Yet, I long for the days when God wasn't so big.  When He dared walk among His people and actually engage with them.  And I have no reason to believe He doesn't still do so.  I have no reason to assume God is past that phase in His relationship with us.  I have no reason to think that I haven't already run into Him nor should I believe that I never will again.  I refuse to believe in a God who "doesn't do that any more" because my God has told me He is the same yesterday, today, tomorrow, and forever.  Which means He has got to be here somewhere.

He just can't stay away. 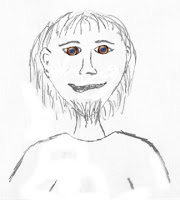 Would you be disappointed if your great big God looked less like the heavens and more like, well, you? What would you say to a God who doesn't look like NASA's telescope has seen but looks more like...this?